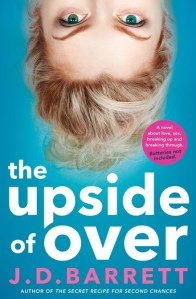 The Upside of Over

A scathingly brilliant new novel from TV scriptwriter J.D. Barrett, author of THE SECRET RECIPE FOR SECOND CHANCES, that explores sex, love and all the stuff in-between.

What happens when one of the country’s most popular identities goes from reading the news to being the news?

Olivia Law had always been the good girl. Great grades, perfect career, husband, house and hairdo. She’d learnt image was everything so she refused to look below the surface of her life. When not at work, her minutes were filled with causes, chairing boards and dining at fabulous restaurants with her equally fabulous husband, David. She kept up the Botox, blow-dries and worked hard. It wasn’t enough, but whenever doubt crept in she’d head to a pilates class or plan a renovation on her trophy house.

Olivia wasn’t prepared for David to leave. The fact that they hadn’t had sex for two years should have triggered warning bells … it didn’t.

In an attempt to fix her broken marriage Olivia exposes herself like never before. But when her confession goes viral, the husband, house and job disappear. The woman who once offered glamorous reassurance and a steady gaze is labelled a princess of perversion. Humiliated, defeated, facing fifty shades of failure, she’s left wondering who the hell she really is? Stripped bare, she abandons perfection … and something remarkable happens.

Olivia Law just might get her sass back (and this time, it’s the real thing).

J D Barrett launches an attack on misogyny, the media and ageism (45 is now over the hill – did you know?), in her new novel The Upside of Over. J.D takes no prisoners; she immediately projects the reader into a steamy fantasy/sex scene in the introductory chapters – initially shocking, certainly thought provoking, J.D. delivers misogyny straight to the table with the question “if this had a been  male newsreader – how different would the response be.”   More than a year before the Harvey Weinstein scandal J.D. already had her own version of this fictional offering written.

At times confronting and thought provoking, this novel also has a keen sense of fun, I love the observations/comments/sarcasm from the minor characters – Finn, Daisy and Karen.  This book easily translates to television I think.

I look forward to hearing J.D. talk about her inspiration behind the book in my next post. Stay tuned.