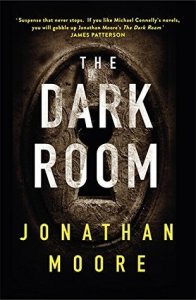 The heart-pounding follow-up to the “electrifying”* Poison Artist shows what happens when our deepest secrets are unburied.

Gavin Cain, an SFPD homicide inspector, is in the middle of an exhumation when his phone rings. San Francisco’s mayor is being blackmailed and has ordered Cain back to the city; a helicopter is on its way. The casket, and Cain’s cold-case investigation, must wait.  At City Hall, the mayor shows Cain four photographs he’s received: the first, an unforgettable blonde; the second, pills and handcuffs on a nightstand; the third, the woman drinking from a flask; and last, the woman naked, unconscious, and shackled to a bed. The accompanying letter is straightforward: worse revelations are on the way unless the mayor takes his own life first.  An intricately plotted, deeply affecting thriller that keeps readers guessing until the final pages, The Dark Room tracks Cain as he hunts for the blackmailer, pitching him into the web of destruction and devotion the mayor casts in his shadow.

Dark, dark and darker- this fantastic police procedural will keep you up all night until the crime has been solved and the villains dealt with.

This is a multilayered narrative – narratives of the past (cold cases) and present (new case) colliding providing depth to the narrative and then there is the back story – every bit as engaging – the story of Cain, what happened at his precinct – something shocking that is referred to but not fully disclosed and the incident involving Cain’s now girlfriend, Lucy – a virtual recluse since the incident (in which she was a victim/hero).  Moore drip feeds us information about the various stories throughout the read but it is not enough, I want to know more about this situation and how the relationship between Cain and Lucy began…there is so much happening in this narrative.

Dark, evocative, complex and engaging – this police procedural has it all – and I do hope there is a book 2 to come soon.