A very personal look at a senseless crime. 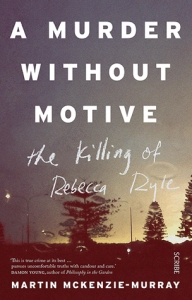 A Murder Without Motive: the killing of Rebecca Ryle

In 2004, the body of a young Perth woman was found on the grounds of a primary school. Her name was Rebecca Ryle. The killing would mystify investigators, lawyers, and psychologists – and profoundly rearrange the life of the victim’s family.

It would also involve the author’s family, because his brother knew the man charged with the murder. For years, the two had circled each other suspiciously, in a world of violence, drugs, and rotten aspirations.

A Murder Without Motive is a police procedural, a meditation on suffering, and an exploration of how the different parts of the justice system make sense of the senseless. It is also a unique memoir: a mapping of the suburbs that the author grew up in, and a revelation of the dangerous underbelly of adolescent ennui.

A very personal look at a senseless crime.

A community in shock, two families’ lives for ever changed; a teenager the victim of a senseless murder, her death impacting on the psyche of those who knew her, those who were in her orbit and even those who knew her only because of the media attention surrounding her death. The murder of Rebecca Ryle was to have a profound influence on so many including the young man soon to be journalist Martin McKenzie-Murray.

The proximity of her death eclipses the innocence of this young Martin McKenzie-Murray; the author lived close to the Ryle’s and was familiar with the everyday places of Rebecca’s life, the personal ‘second hand’ knowledge existing because the author’s brother had at one point associated with a social group that included the perpetrator of the crime as a member, and because of the similarity in ages between the writer and the victim, this death weighed heavy on the mind of the author. Eight years later the author is still haunted by Rebecca’s death and seeks to discover how “the psychic bruising of the suburbs” contributed/affected her life and ultimately led to her death. This book is the result of his discoveries, personal interviews, research, theories regarding urban society and its social constructs. This book is more than a dry summation of facts or court or police records, this is an intensely personal study of the effects of one young person’s death on a community and on the writer of this book.

This is a very personal look at a senseless crime – I keep repeating the word senseless, this crime makes no sense; occurring just 50m from Rebecca’s home, a life ending for no apparent reason and the perpetrator with no recollection of his motivation for causing her death (or one that he is willing to share), this crime stunned so many. If you lived in Western Australia around the time of Rebecca’s murder you will have your own memories of this event, memories that cannot be erased.

Martin McKenzie-Murray has written a thought provoking and intense narrative. As someone involved in the documentary industry this books reminds me so much of the process of documentary making – the gathering of facts, the research, the interviews, the connections you cannot help but make with the subject of the documentary (book) and those close to your subject. As in documentary making your life becomes entwined with those in your film (book), you relate to them and their feelings. The documentary is a journey (you have made a personal journey in this book). Thank you for sharing your journey; this incident perhaps weighs more heavily on me now than it did at the time because of your book.