A propulsive new thriller about the obsessive nature of love when an intensifying relationship between best friends is disrupted by a kidnapping.

Growing up as best friends in small-town New Hampshire, Jon and Chloe are the only ones who truly understand each other, though they can never find the words to tell one another the depth of their feelings. When Jon is finally ready to confess his feelings, he’s suddenly kidnapped by his substitute teacher who is obsessed with H.P. Lovecraft and has a plot to save humanity.

Mourning the disappearance of Jon and facing the reality he may never return, Chloe tries to navigate the rites of entering young adulthood and “fit in” with the popular crowd, but thoughts of Jon are never far away.

When Jon finally escapes, he discovers he now has an uncontrollable power that endangers anyone he has intense feelings for. He runs away to protect Chloe and find the answers to his new identity–but he’s soon being tracked by a detective who is fascinated by a series of vigilante killings that appear connected.

Whisking us on a journey through New England and crashing these characters’ lives together in the most unexpected ways, Kepnes explores the complex relationship between love and identity, unrequited passion and obsession, self-preservation and self-destruction, and how the lines are often blurred between the two.

This was an interesting read. It was not the book I thought I was going to read. (And I wasn’t expecting another You but was expecting something more dynamic and engaging).   The beginning was brilliant – it had the feel of an early, creepy, Stephen King horror/sci fi but then decided it couldn’t make up its mind what story it wanted to tell – horror, mystery, crime, love story – in the end I decided enduring love was the theme at the heart of this read.

I found the characters aside from the protagonist Jon, to be unlikeable.  I found the frequent references to an existing horror story had no meaning for me – and I think this is the biggest downfall of the read – I think it doesn’t translate to a wider audience that is not familiar with this author/existing narrative, consequently I wasn’t really engaged in the read and the characters plight and I found the chapters about Jon as an avenging angel pathway predictable.

On the positive side – I did think about the resolution long after I put the book back on my shelf.

When We Were Alive

When we first meet Bobby, he is a shy, twelve-year-old magician who falls in love with his best friend.

William is consumed with self-hate and drinks to escape the memories of his father’s sadness and his mother’s death.

Myles is writing letters to a mother he has never met.

Three different people from three different times each explore the dark side of relationships, search for beauty in sadness and try to bear the burden of guilt from living in a world we are powerless to fix.

I really struggled to continue with this book…the three individual stories seemed disconnected and not even particularly interesting until about 80% of the way through the book.  But I persevered.  I thought I understood where this was going…or rather where the stories were meeting but really I didn’t.  The ending was so sad.  I wondered why I continued with this, hopeful I suppose.

I enjoyed the story of the enduring love between Bobby and Rose.  The war narrative was painful and real.

William’s anger was understandable – his attempt to feel were interesting and reminded me of the lives of so many damaged children in care, self-harming in an attempt to feel something, to feel anything, to distract themselves from the realities of their lives.

But mostly these individual stories remained just that, I am at a loss to understand the overall picture. If you understand this book – perhaps you can share that knowledge with me.

A darkly funny, pot-infused novel of teenage maladjustment in the tradition of Beautiful Children from a compelling new voice in American fiction.

For a high school senior, Addison Schacht has a lot of preoccupations. Like getting into college. Selling drugs to his classmates. His complicated relationship with his best friend (NOT his girlfriend) Digger. And he’s just added another to the list: the murder of his classmate Kevin Broadus, and his own absurd, obsessive plan to investigate the death. When presented with an essay question on his application to the University of Chicago—What are your best and worst qualities?—Addison finds himself provoked into giving his final, unapologetic say about all of the above and more.

Addison Schacht finds good company among American literature’s cadre of unsettled, restless youth, from Huck Finn to Holden Caulfield. The November Criminals takes on the terrain of the classic adolescent truth-telling novel and—with nerve and erudition—carves out its own unique territory.

I usually try to be fair to a book and read what I have started and find something positive in the narrative recognising that not every book will satisfy my tastes, but may “work” for someone else; I should have stopped at the description where it mentioned “pot infused” this element of the writing was severely underrepresented in the blurb. This book rambles, is pretentious and has no redeeming features – I am amazed that this book was published let alone now being made into a feature film. Definitely not for me… 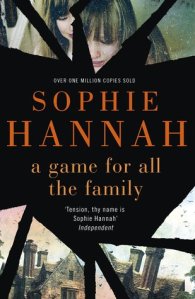 A Game For All the Family

Justine thought she knew who she was, until an anonymous caller seemed to know better…

After fleeing London and a career that nearly destroyed her, Justine Merrison plans to spend her days doing as little as possible. But soon after the move, her daughter Ellen starts to seem strangely withdrawn. Checking Ellen’s homework one day, Justine finds herself reading a chillingly articulate story about a series of sinister murders committed at the family’s new house. Can Ellen really have made all this up, as she claims? Why would she invent something so grotesque, set it in her own home and name one of the characters after herself? When Justine discovers that Ellen has probably also invented her best friend at school, who appears not to be known to any of the teachers, Justine’s alarm turns to panic.

Then the anonymous phone calls start: a stranger, making accusations and threats that suggest she and Justine share a traumatic past – yet Justine doesn’t recognise her voice. When the caller starts to talk about three graves – two big ones and a smaller one for a child – Justine fears for her family’s safety. If the police can’t help, she’ll have to confront the danger herself, but first she must work out who she’s supposed to be…

Unfortunately this was not a book that I particularly enjoyed- in fact I had to force myself to finish reading it, ever the optimist thinking which each page I read it might redeem itself, it didn’t. I loved the premise and the introduction was brilliant…a hint of mystery that needs unravelling, Deja vu perhaps, a little bit eerie. However I was unable to suspend my disbelief and go along with the ridiculousness of the convoluted plot and the only likable character in this book was Figgy the Dog. I really felt like I was sitting round a camp fire, every person in the circle charged with adding more to a story, the story growing weirder, stranger and sillier as it was passed along. This one is not for me but I see others have been enchanted by it. Oh well each to their own.