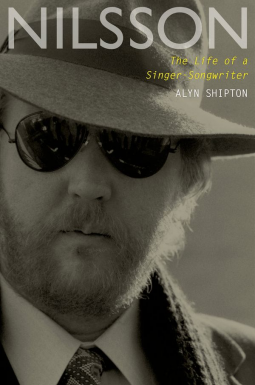 The Life of a Singer-Songwriter

Paul McCartney and John Lennon described him as the Beatles’ “favorite group,” he won Grammy awards, wrote and recorded hit songs, and yet no figure in popular music is as much of a paradox, or as underrated, as Harry Nilsson.

In this first ever full-length biography, Alyn Shipton traces Nilsson’s life from his Brooklyn childhood to his Los Angeles adolescence and his gradual emergence as a uniquely talented singer-songwriter. With interviews from friends, family, and associates, and material drawn from an unfinished autobiography, Shipton probes beneath the enigma to discover the real Harry Nilsson. A major celebrity at a time when huge concerts and festivals were becoming the norm, Nilsson shunned live performance. His venue was the studio, his stage the dubbing booth, his greatest triumphs masterful examples of studio craft. He was a gifted composer of songs for a wide variety of performers, including the Ronettes, the Yardbirds, and the Monkees, yet Nilsson’s own biggest hits were almost all written by other songwriters. He won two Grammy awards, in 1969 for “Everybody’s Talkin'” (the theme song for Midnight Cowboy), and in 1972 for “Without You,” had two top ten singles, numerous album successes, and wrote a number of songs — “Coconut” and “Jump into the Fire,” to name just two — that still sound remarkably fresh and original today.  He was once described by his producer Richard Perry as “the finest white male singer on the planet,” but near the end of his life, Nilsson’s career was marked by voice-damaging substance abuse and the infamous deaths of both Keith Moon and Mama Cass in his London flat.

Drawing on exclusive access to Nilsson’s papers, Alyn Shipton’s biography offers readers an intimate portrait of a man who has seemed both famous and unknowable — until now.

Let me preface my review with the statement – I am a big Harry Nilsson fan. And I thought I knew a lot about this musician, his music and his life. I have listened to and bought his music and have watched and enjoyed the documentary Who Is Harry Nilsson (And Why Is Everybody Talkin’ About Him?) but in reality I knew nothing about this complex paradox of a man who inspired and was inspired by the world and what it had to offer. Nilsson produced so many more albums than I was aware of, he made movies, he acted, he wrote jingles for commercials, he wrote sound tracks for movies, he wrote musicals, he wrote kids books, he was a singer and a songwriter – he was prolific in output and somewhat manic in his behaviour. Nilsson worked hard and played even harder.

It took me a little while to get into this book – I was not aware of Harry’s childhood or upbringing, in fact I hardly knew Harry existed before “One ( Is the loneliest number)” or “Jump into the Fire” or “Without You”. There was so much more to Harry than I had glimpsed on the popular music charts. There a library of music out there that I must discover and Shipton has opened my eyes and ears to it! I was not aware of the influence and relationship Harry had with so many well known and respected artists – this is a side of Harry that was unknown to me.

Once I started reading about times and song material that I was familiar with I was mesmerised by this story of the good time boy who partied and partied and wanted work to be fun! (Dont we all wish that?) Harry wished it and Harry lived it- to excess. Even though I was very aware before I picked up this book that Harry Nilsson was dead I still felt saddened when his demise was revealed on these pages. Harry Nilsson was by all accounts a likable rogue, an entrepreneur, an intelligent artiste who could see and work “outside of the box” and when you look at the body of work that was his life time achievements, the depth of his talent cannot be ignored. He was a truly gifted narrator of the journey of life; his words and music moving, passionate or funny, ironic, sad, entertaining and his observations of life poignant. I very much enjoyed delving into the life and times of Harry Nilsson and I look forward to re discovering his talent from his beginnings to his classic hits.

And let me share with you my favourite Nilsson songs:

Jump into the Fire  http://www.youtube.com/watch?v=8QghwNqlCRE