“If you’re not a big fan of vegetables, I have a feeling this recipe from the south
of France will change your mind. Ripe vegetables are baked together with garlic and fresh herbs, and the result smells like summer.” (p.150) Place a frying pan over medium heat, add 1 tablespoon of olive oil and sauté the onion for about 15 minutes, or until lightly golden, reducing the heat a little if the onion begins to catch. Add the garlic and 1 tablespoon of thyme and cook for 2 minutes. Spread the onion mixture over the base of a large roasting tin.

Wash the veggies and cut them widthways into 1 cm (½ inch) thick slices. Tightly arrange the vegetables in rows over the onion base, starting with the zucchini, followed by the eggplant then the tomato. Gently push the slices out so they sit in a diagonal pattern, exposing some of the flesh. Drizzle with the remaining olive oil and sprinkle over the rosemary and remaining thyme. Season with salt and pepper and bake for 45 minutes, or until the vegetables are tender. 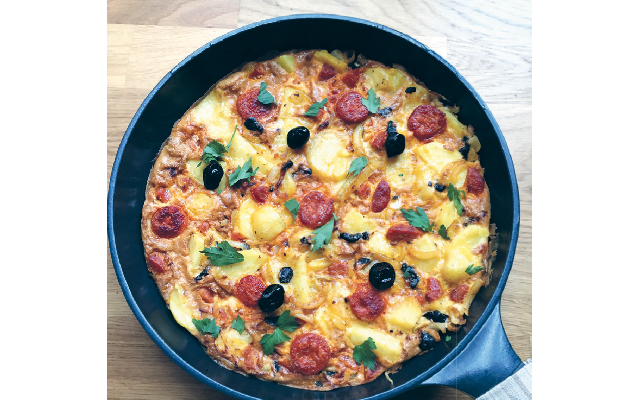 Place the potatoes in a small saucepan and cover with cold water. Bring to the boil and cook, uncovered, for 10 minutes. Strain, rinse under cold water and thinly slice.

While the potatoes are cooking, heat the coconut oil in a deep frying pan over medium heat. Add the chorizo and cook for 2–3 minutes on each side, until browned. Remove to a plate and reserve the chorizo fat and juices in the pan. Once the chorizo has cooled down, dice it roughly.

Add the onion and olive oil to the frying pan and cook over low–medium heat for 5–7 minutes, stirring a few times, until soft and golden. Add the garlic, sliced potato, chopped olives and chorizo, and stir through.

In a bowl, whisk and season the eggs with a generous pinch of sea salt and some black pepper. Pour over the potatoes and rotate the pan to spread the egg mixture evenly. Cover with a lid and cook over medium heat for 3–4 minutes until cooked through the bottom half. Pop the pan under a hot grill for a further 3 minutes, until golden brown on top. Sprinkle the chopped parsley over the top to serve.

This dish is well balanced in most nutrients

but it’s particularly high in vitamin C, selenium and potassium.