Twenty-year-old Finley Montgomery has always been different. She’s never been able to control the things that happen to her – not even the pain of a new tattoo or the roar of her motorcycle can drown out the chaos. When she moves to her grandmother’s house in the small town of The Hollows in upstate New York, Finley is hoping to a fresh start.

Then a detective shows up. He knows about Finley’s unusual gifts and he wants her help. There’s a little girl missing and the police investigation has gone cold. Now, time is running out. Only Finley can uncover the truth – but can she find the answers before it’s too late?

I am a big fan of Lisa Unger, I love how she weaves the paranormal into the everyday, ordinary lives we live, the narratives do not seem incredible, they read as possible, and I am open to the suggestion of the type of paranormal experiences she reflects in her writing. Indeed as life imitates fiction and vice versa I have recently made acquaintance with someone who has explored “the afterlife”, hauntings etc and “virtually “ met up with an old school friend who “sees/feels/experiences “  violent deaths that occurred as she passes by old crime scenes. (Eerily this sounds very much like the protagonist in Australian author Melanie Casey’s Cass Lehman and Detective Ed Dyson series) but I digress.

Ink and Bone is a very satisfying though dark read, missing children are themes that are emotionally charged and grim, happy endings are not generally the outcome.   This narrative is no different – grim, dark, powerful and emotional yet it is the characters – their strengths and attitudes that lighten this read.

If you have read the three novellas that Lisa Unger “The Whispers” series you will have made acquaintance with some of the characters and locations in this novel. And this is where the element of reader satisfaction is called into play – the relationships developed here are gems! Finley reads as any young person trying to establish her own way in life; almost independent, trying news ways, making mistakes… Her grandmother is a delightful character too   – supportive, intuitive and with special “talents” that are a family trait.

All in all in all an immensely satisfying read – wonderful three dimensional characters and an intense, suspenseful read. Add an unreliable narrator who provides such a wonderfully wicked bittersweet twist to this ending…you gotta love this author and this book.

Keep your eyes peeled for a small black iron door.

Down the road from a working-class British pub, along the brick wall of a narrow alley, if the conditions are exactly right, you’ll find the entrance to Slade House. A stranger will greet you by name and invite you inside. At first, you won’t want to leave. Later, you’ll find that you can’t. Every nine years, the house’s residents — an odd brother and sister — extend a unique invitation to someone who’s different or lonely: a precocious teenager, a recently divorced policeman, a shy college student. But what really goes on inside Slade House? For those who find out, it’s already too late…

Spanning five decades, from the last days of the 1970s to the present, leaping genres, and barrelling toward an astonishing conclusion, this intricately woven novel will pull you into a reality-warping new vision of the haunted house story—as only David Mitchell could imagine it.

First my dilemma – how to classify this intriguing little book? Horror is maybe too strong a word for this – or maybe I am just desensitised to the horror here by my other readings, paranormal – yes an element of ghostly other world here definitely, science fiction – a little maybe – there is the extra “dimension” in the narrative but not set in the future, fantasy – again a little of this here too….perhaps speculative fiction is the best fit? I like this definition by http://www.greententacles.com/articles/5/26/ :“Speculative fiction is a term, attributed to Robert Heinlein in 1941, that has come to be used to collectively describe works in the genres of Science Fiction, Fantasy, and Horror…Speculative fiction is also more than the collective title for works of horror, science fiction, and fantasy. The term also embraces works that don’t fit neatly into the separate genres. Tarzan. Television’s Early Edition. Stories by Sir Arthur Conan Doyle. Tales that span the science fiction, fantasy, and horror genres. Stranger in a Strange Land. The Twilight Zone. Stories by Edgar Allen Poe. Tales that have been labelled simply as ‘weird’ or ‘adventure’ or ‘amazing’ because there was no proper place to put them. Stories on the fringe.

When you’ve come across a story or movie or game that both is and isn’t science fiction, fantasy, and/or horror, then you’ve discovered speculative fiction.” [Emphasis added by author – me 🙂 )

Slade House is a work of intriguing speculative fiction – a narrative that evokes fear, tribulation and concern. As you read you just know something is not right, that the main characters should not enter that building, should leave quickly, and shouldn’t be so trusting… that something bad is going to happen… and of course it does! David Mitchell manipulates his characters beautifully, exposes their weaknesses and egos and hopes and then… tramples on them. Intriguing and enjoyable reading with a couple of delicious twists but for me the ending was just not powerful enough, did not make me gasp or fret or deliver the punch I was expecting. Yet still enjoyable – a book I will recommend and has made me add David Mitchell’s previous book The Bone Clocks to my wish list. 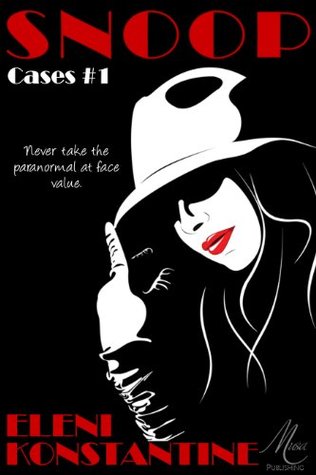 Daisy Luck is a SNOOP – Sanctioned Nationalized Officer Of the Paranormal. Her latest case involving a vampire and a gremlin has her private eye senses in a spin. Throw in yummy Detective Maroney and her life couldn’t get more complicated – or could it?

This novella was a delightful introduction to the paranormal/fantasy world of Daisy Luck P.I. This read is engaging and light and instantly lifted my spirits (no pun intended). A perfect pick me up for the weary, jaded reader and a great introduction to the author’s skill set – her wonderful imagination, entertaining words, characters that are quirky and likeable, and a paranormal narrative with a hint of romance – a great combination. I look forward to reading more by this Australian writer in the near future.

A paranormal YA adventure.

Kennedy Waters didn’t believe in ghosts, until one tried to kill her.

When Kennedy finds her mother dead, her world begins to unravel. She doesn’t know that evil forces in a much darker world are the ones pulling the strings. Not until identical twins Jared and Lukas Lockhart break into her house and destroy a dangerous spirit sent to kill her. The brothers reveal that her mother was part of an ancient secret society responsible for protecting the world from a vengeful demon – a society whose five members were all murdered on the same night.

Now Kennedy has to take her mother’s place in the Legion if she wants to uncover the truth and stay alive. Along with new Legion members Priest and Alara, the teens race to find the only weapon that might be able to destroy the demon – battling the deadly spirits he controls every step of the way.

Suspense, romance, and the paranormal meet in this chilling urban fantasy, the first book in a new series from Kami Garcia, bestselling co-author of the Beautiful Creatures novels.

This was an interesting and exciting paranormal mystery that is a quick read. Personally I would have like to have seen a little more development of the introductory scenes – I felt that the author leapt into the bizarre, paranormal and mysterious too quickly and the protagonist accepted the sudden and unexpected paranormal activities without raising much concern or questioning.  That being said the read was quite enjoyable and had me reminiscing about the TV series Buffy the Vampire Slayer, of which I am a big fan.

I think the author and this series has potential. This is a little piece of escapism that is designed to leave you asking “what’s next?”

If you like your crime fiction spiced with a paranormal flavour this book is for you.

Of Fever and Blood

This fast-paced, supernatural thriller is a race against time to defeat a deadly force.

Of Fever and Blood begins at the end of an investigation. Inspectors Vauvert and Svärta, an albino profiler, solve a series of sadistic ritual murders and the supposed culprits, the Salaville brothers, are killed in a standoff.

However, one year later, the killings start all over again, but this time in Paris. All forensic evidence point to the brothers, but how can that be?

Their investigation leads Svärta and Vauvert to Judith Saint-Clair, the deathly ill patient at a mental institution that also housed the Salavilles. They discover the incredible truth: Saint-Clair had manipulated the Salavilles into killing young women in order for her to accomplish magic rituals to stave off death. Nothing and no one will stop her from reaching her goal of eternal life . . . death is not an option.

It took me a littler while to get into this book, to get an understanding of the protagonists and feel invested in this story, perhaps it was because I felt the introductory chapters were perhaps more about descriptions – about the settings, the history, the crimes, rather than about the characters and I like a good character based read.

However the action quickly picked up the pace and I was intrigued with this paranormal/ crime/horror story. This was a complex narrative with plenty of plot twists, surprises and gore. This narrative is an interesting exploration of the secret and sometimes dark sides of our soul and asks the question – who/what do we see reflected in the mirror?  This is certainly one for the paranormal fans.

For more information about this author, his writing and a brief video discussion with Sire Cedric click this link:  http://www.openroadmedia.com/sire-cedric

PS You must check out this video – this guy has such fantastic hair!!!