A collection of funny, brilliant, boundary-pushing stories from the bestselling author of Mammoth. A grizzly bear goes on the run after eating a teenager. A hotel room participates in an unlikely conception. A genetically altered platypus colony puts on an art show. A sabretooth tiger falls for the new addition to his theme park. An airline seat laments its last useful day. A Shakespearean monkey test pilot launches into space. The stories in Here Be Leviathans take us from the storm drains under Las Vegas to the Alaskan wilderness; the rainforests of Queensland to the Chilean coastline. Narrated in Chris Flynn’s unique and hilarious style by animals, places, objects and even the (very) odd human, these short fictions push the boundaries of the form by examining human behaviour from the perspective of the outsider.

What an impressive range of styles, voices and ideas this collection showcases, I could read more. There is something here for everyone to enjoy but a couple of these stories are standouts for me; the first, which gives a brilliant, witty insight into the thinking of a grizzly bear – hilarious. But my very favourite was the last, Kiss Tomorrow Goodbye, set in the underground sewers and the sky scrapers of Las Vegas. A story that illustrates how hope, joy and love can be found anywhere. Loved this one.

PS I was really fortunate to be gifted a set of “chapter cards” with brilliant artworks on the front and extracts of each chapters on the back. What a fabulous idea!

This short piece by AK Alliss maybe become something more…maybe not…I enjoyed this piece as it is.  I hope you do to.

His eyes open hesitantly, unfamiliar sounds laced with some distant memory that he can’t quite recall, that déjà vu feeling at the back of his skull, pressing with urgency. The sounds get louder, a clinking, rhythmic beat that closes distance. His eyes are greeted by a flaking ceiling, the colour of old paper, an errant spider web billowing in a hidden breeze. His stomach feels folded inside out and he wonders for a second if he has been drinking, but instantly dismisses the idea as being inaccurate.

Sitting up, he stares for a moment, at poorly painted bars that grant him a view of a railing and a narrow catwalks, and still, he cannot remember how he got here. A flash in front of his eyes, warm, liquid irises the colour of a summer sea and hair that spirals in infinite repetition replaces his view of the bars, but then is lost to sight. He tries to get back that face but it vanishes as quickly as it appeared, a phantom that does not belong in this place of muted colours and cool barriers.

A man appears, military grade haircut and eyes that are as stern and unforgiving as the sea, a tray held in a gnarled hand that could as easily be carved from wood. The man studies him and grunts, sniffing in his inspection before tapping the bars once with a nightstick, producing the same sound that has awoken him from his slumber. He moves as if he will tap the bars once more but appears to decide against it, hanging the nightstick from a loop on a broad leather belt. The jailer replaces the nightstick with a ring of keys, reaching forward and unlocking a small panel inset between the bars, just wide enough to permit the tray.

The tray is passed between the bars and he can see now that he is being offered food, if that definition could apply to the assortment of green and grey smears held in small compartments on the tray. A flimsy plastic fork, edges rounded, sits in the mushed food and is nearly knocked from the tray as it passes through the gap. The guard holds the tray through the gap and he blearily realises that he is supposed to take it. He nods once and the guard ignores him, releasing the nothing food into his grip, rehanging the keys from their clip and reacquiring the nightstick.

He gives one more tap with the long, solid looking piece of steel, the sound more of a bang than the tap of previously, before moving on to the next cell. As he departs, he begins whistling a tune, and he recognises it as something by the Rolling Stones.

That collapsing feeling wells up unexpectedly and he swears that he can smell hot coffee, as if from a great distance. He squints as sweat coats his forehead and runs into his eyes, swiping furiously at them without managing to clear them of the sting. He hears a woman’s voice and he knows at once that it belongs to the face that flashed across his mind just prior to the guard arriving.

The tray in his hands twists as if it is made of nothing more substantial than an elastic band and he feels at once as if his body is doing the same. He is all angles and planes of uncertainty and his legs collapse, the solid green of the concrete floor rushing towards him. The guard’s whistling draws away, faster than a speeding vehicle and the concrete smashes into his face, only to be replaced by the smell of loam and spring. The whistle reaches a piercing shriek and moulds itself into the call of a bird, somewhere high overhead, it’s cry broken by a woman’s, warm and sultry, low of timbre. And yet, he can still hear the Stones singing about a red door that they want to have painted black, although this time its sound is blurred and buzzing, produced by a small radio next to him.

“Caleb, where were you?”

Caleb feels her thighs, held close together beneath the bird’s nest of his hair, bright and penetrating sunlight hurting his eyes as he opens them. She is there above him, her face occluded by the sun above her, making her features become lost, a silhouette that he reaches towards. She laughs and tilts her head up and he knows now why he doesn’t want to remember this moment, to be here with her. Pain fills him as he gropes internally for a reply, settling on something that feels as ominous as the moment he has just returned from.

“Somewhere you weren’t.” is the only answer he can give her. 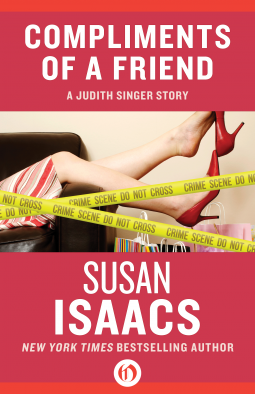 Compliments of a Friend

Compromising Positions’s Judith Singer is back in a story that delivers plenty of Susan Isaacs’s renowned wit and sharp-eyed observations of the contemporary scene—along with a riveting mystery!

Chic Vanessa Giddings, founder and CEO of Panache, the largest employment agency on Long Island, falls into a coma in the designer shoe department of Bloomingdale’s . . . and dies. It’s not long before Judith Singer, former housewife, current widow, and local history professor, decides to investigate. She cannot believe the official ruling: that her wildly successful, confident, and iron-willed neighbor committed suicide with a drug overdose. Vanessa was buying shoes, and Judith knows accessorizing is a life-affirming act. So was it foul play?
Tracking the gossip about the late Vanessa and trusting her own acute instincts about human nature, Judith encounters more than a few surprises (including a big romantic one) as she investigates the death—and the life—of the misjudged mogul who turned out to have been more vulnerable than anyone guessed.

This ebook features an afterword by Susan Isaacs, as well as an illustrated biography of the author including rare images from her personal collection.

The words flow on the pages; the writing appears effortless but alas this short, short story ends without a real conclusion and that was disappointing. I was enjoying the witty conversation between Judith and the rest of the cast, I was enjoying getting to know this canny investigator and could see the threads of this investigation starting to come together to form a solid basis for the case. But I was hoodwinked – this story was really just an introduction that allowed us to meet the cast, meet the victim and nothing more. Mid phone conversation Judith gets an incoming call and at that point the story abruptly ends. Nothing is resolved, there is no third act- and hardly any second act either. Such an entertaining writer disappoints at the end.