By the bestselling author of Dark Matter and Thin Air, an outstanding new piece of story-telling, a tale of mystery and imagination laced with terror. It is a masterwork in the modern gothic tradition that ranges from Mary Shelley and Bram Stoker to Neil Gaiman and Sarah Perry.

“Something has been let loose…”

In Edwardian Suffolk, a manor house stands alone in a lost corner of the Fens: a glinting wilderness of water whose whispering reeds guard ancient secrets. Maud is a lonely child growing up without a mother, ruled by her repressive father.

When he finds a painted medieval devil in a graveyard, unhallowed forces are awakened.

Maud’s battle has begun. She must survive a world haunted by witchcraft, the age-old legends of her beloved fen – and the even more nightmarish demons of her father’s past.

Spanning five centuries, Wakenhyrst is a darkly gothic thriller about murderous obsession and one girl’s longing to fly free.

Wakenhyrst is a gothic feminist tale (is that such a genre or just the mantle I read this book with?) that oozes a chilling miasma of menace and madness. Superstition, religion and misogyny rule and life for a sensitive and intelligent female child is harsh, restrictive and lonely.

This character driven narrative offers an antagonist you easily abhor (the father Edmund Stearne) and Maud (the daughter) is the protagonist that you admire, empathise with and cheer on… Megalomania is Edmund Stearne – he is a tyrant, superstitious, self-obsessed, a sex manic, controlling and vile and ugly  – his beliefs, though extreme ( I hope) mirrored those of a society that held women in contempt and treated as (not very valuable) possessions. This was a very interesting study of attitudes and superstitions of the time.

The fens provide an eerie backdrop to the repressive madness that ruled Wake’s End. However I was expecting more, I felt the horror element lacked vitality. Creepy, eerie, repressive and yet fascinating sums up my emotional response to this narrative.

Give the Devil His Due

When Rowland Sinclair is invited to take his yellow Mercedes onto the Maroubra Speedway, renamed the Killer Track for the lives it has claimed, he agrees without caution or reserve.

But then people start to die.

The body of a journalist covering the race is found in a House of Horrors, an English blueblood with Blackshirt affiliations is killed on the race track, and it seems that someone has Rowland in their sights.

A strange young reporter preoccupied with black magic, a mysterious vagabond, an up-and-coming actor by the name of Flynn, and ruthless bookmakers all add mayhem to the mix.

With danger presenting at every turn, and the brakes long since disengaged, Rowland Sinclair hurtles towards disaster with an artist, a poet and brazen sculptress along for the ride.

The sub-genre historical crime fiction is more than the re-imagining of an incident set in the past; when executed skilfully it is engaging, thought provoking and shares the authors passion for the era and their understanding of the society and culture of that period. Sulari Gentill’s passion for this era is obvious on every page. The tone, style and colour of this narrative paints an evocative and very visual account of Australian society in the 1930’s. I love reading crime fiction based in this period – the time frame is far enough removed from my life that I have no firsthand knowledge of the time yet the period is still relevant and interesting and accessible. Records still exist from that time frame: news reels, documentaries, oral histories, films, art, fashion, music etc. that allows us a glimpse of the past, it is the context, the social fabric, the political views and the mystery that this talented author weaves into the narrative that makes this work so engaging.

And did I mention great characters? I particularly enjoyed reading about Ed – Edna Higgins; a creative, talented, generous and strong individual who does not conform to societal pressures that inform how a 1930’s woman should be; she is herself. 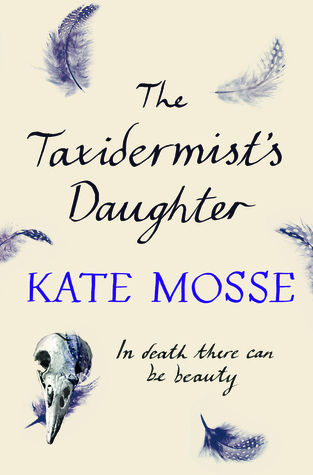 Sussex, 1912. In a churchyard, villagers gather on the night when the ghosts of those who will die in the coming year are thought to be seen. Here, where the estuary leads out to the sea, superstitions still hold sway.

Standing alone is the taxidermist’s daughter. At 17, Constantia Gifford lives with her father in a decaying house: it is all that is left of Gifford’s once world-famous museum of taxidermy. The stuffed animals that used to grace every parlour are out of fashion, leaving Gifford a disgraced and bitter man.

The bell begins to toll and all eyes are fixed on the church. No one sees the gloved hand pick up a flint. As the last notes fade into the dark, a woman lies dead.

While the village braces itself against rising waters and the highest tide of the season, Connie struggles to discover who is responsible, but finds herself under suspicion. Is Constantia who she seems – is she the victim of circumstances or are more sinister forces at work? And what is the secret that lies at the heart of Gifford House, hidden among the bell jars of her father’s workshop?

Told over one summer, THE TAXIDERMIST’S DAUGHTER is the haunting new novel from the bestselling author of LABYRINTH, SEPULCHRE, CIDADEL and THE WINTER GHOSTS.

A book of lies, secrets and taxidermy – an engaging read. Kate Mosse is a great story teller. This book, sited in 1912 is mysterious and atmospheric and cleverly captures the essence of village life at the time; superstitious, male centred, where money can buy almost anything except redemption.

This is a book told from multiple perspectives, predominantly that of Connie who had an accident when she was twelve years old and since has had memory issues. Slowly as the pages turn, Connie starts recollecting small parts of the traumatic event that preceded her loss of memory. This is a narrative of many revelations, scattered with transcriptions from Mrs R Lee’s “Taxidermy: Or the Art of Collecting, Preparing and Mounting Objects of Natural History”, excerpts that foretell the gory demise of the victims in this book.

If you like historical fiction, a strong female protagonist, a hint of ghosts and ghouls and superstition peppered with some very gory murders then this book is for you.