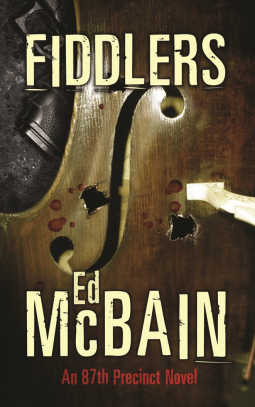 It started with the blind violinist – shot twice through the head at point-blank range in the alley outside his dingy restaurant. But it’s only when the omelette lady gets shot with the same gun in the same way twenty-four hours later that the 87th Precinct really starts to sit up and take notice.

But Steve Carella and the boys at the Precinct always seem to be one step behind the killer, and are unable to prevent the death toll rising. The trouble is, while the gun is the same, none of the victims seem to be related in any way. And why is the killer heard to introduce himself as ‘Chuck’ before pumping two bullets into their bodies?

The author Evan Hunter who writes under the pseudonym Ed McBain, (now deceased), began writing the 87th Precinct series before I was born! Ed McBain wrote more than eighty novels including this series and many successful screen plays and some of his novels have been adapted for the big and small screens and theatre. This writer had a huge talent – I regret that I have not read any of his novels before now.

The Fiddlers is a fantastic police procedural, as I was reading I could see the film of this story playing out in my head; I could clearly envisage the characters, the city streets, the police precincts, the cops setting around their desk, coffee in hand discussing the “Glock Killer” case. This narrative remains as relevant today as when it was first written – which is a major feat in itself. The characters are credible, even the killer has some redeeming features and the themes of bullying, abuse of children, abuse of power are topical today.

A great police procedural, an intriguing story and characters you will find believable – this book has much to offer the serious crime fiction reader and I look forward to catching up with the rest of this series.