Police Sergeant William South has a reason for not wanting to be on the murder investigation.

He is a murderer himself.

But the victim was his only friend; like him, a passionate birdwatcher. South is warily partnered with the strong-willed Detective Sergeant Alexandra Cupidi, newly recruited to the Kent coast from London. Together they find the body, violently beaten, forced inside a wooden chest. Only rage could kill a man like this. South knows it.

But soon – too soon – they find a suspect: Donnie Fraser, a drifter from Northern Ireland. His presence in Kent disturbs William – because he knew him as a boy. If the past is catching up with him, South wants to meet it head on. For even as he desperately investigates the connections, he knows there is no crime, however duplicitous or cruel, that can compare to the great lie of his childhood.

Moving from the storm-lashed, bird-wheeling skies of the Kent Coast to the wordless war of the Troubles, The Birdwatcher is a crime novel of suspense, intelligence and powerful humanity about fathers and sons, grief and guilt and facing the darkness within.

This beautifully written book tells the story of Billy McGowan, the boy raised amidst “The Troubles” of Northern Ireland who then becomes William South, Police Sergeant and Neighbourhood Officer for the Kent Police. He lives his life alone and he lives quietly, he is also a birdwatcher. He and his birding companion Bob Rayner spend hours together, yet neither man has any clue of the secrets held by the other.

Until Bob Rayner is found dead, murdered in a most horrible and brutal way.

For Detective Inspector Alexandra Cupidi who has transferred from the Metropolitan Police, this is her first case in her new post. Despite knowing that Bob was a friend of Souths, she wants him to accompany her to the grisly crime scene. South is deeply affected by the sight of his murdered friend, there appears to be no explanation, no possible reason why someone should do this, yet South recognises the effects of rage when he sees it.

Despite having a murder to investigate, Cupidi is distracted, her teenaged daughter, Zoe, is having problems settling in to her new home and school. Zoe and South develop a friendship of sorts, they discover something in common, each ones mother had moved them to a place they thought safer, yet both mothers had their own troubles to leave behind.

The body count rises, one of the dead is a name from Souths distant past, Donnie Fraser, who as a young man had admired Souths violent father, what possible connection could there be between Fraser and the other deaths? Why does Cupidi order South to keep away from the investigation?

I enjoyed how the author skilfully wove in the stories of both the young Billy and the adult William, separately yet somehow seamlessly, the reader isn’t jarred when moving between the two ages and countries. The ending of a book is, of course important! For me, this book has two endings, difficult to explain without spoilers so I won’t attempt it, just to say that one of them came as a real surprise to me.

I do hold the faint hope of a William South series.

This is a book to buy in hardback, to keep and savour, to take out now and again to re-read. It’s a keeper. 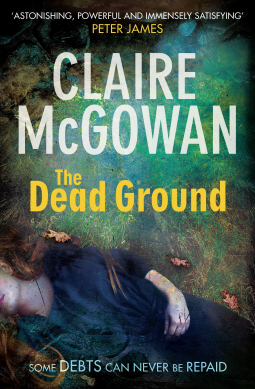 A stolen baby. A murdered woman. A decades-old atrocity. Something connects them all.

A month before Christmas, and Ballyterrin on the Irish border lies under a thick pall of snow. When a newborn baby goes missing from hospital, it’s all too close to home for forensic psychologist Paula Maguire, who’s wrestling with the hardest decision of her life.

Then a woman is found in a stone circle with her stomach cut open and it’s clear a brutal killer is on the loose.

As another child is taken and a pregnant woman goes missing, Paula is caught up in the hunt for a killer no one can trace, who will stop at nothing to get what they want.

Claire McGowan – you are a talent I wish I have discovered earlier! This is a superbly crafted, well written, wonderfully descriptive, powerfully emotional and engaging narrative. I just loved this book and imagine that the earlier books in this series as well written. And yes it did keep me up all night – it was 2am when I finally and satisfactorily finished this read and was then able to allow myself to surrender to sleep. This is  book that stands alone; it does not rely on incidents of graphic violence and forensic pathology to shock the reader into submission; it relies on good storytelling, depth and talent!

This is my first 5 star read for the year – and I am pretty discerning! This narrative has all the elements of a great read – wonderful settings – rural Ireland is stark, harsh, and often remote and eerie. It has  characters that leap of the page, a sub plot; Paula’s story, that is engaging and heart rendering, a background based on the cruel and relentless violence of “The Troubles”, murders and mysteries that will have you guessing to the end and a plot with many twists and turns that will keep you reading until the very last page.

This is a fascinating read. Be carried away to a distant land, to a land of “Troubles”, a land of suspicion and violence and…hope.

The Boy Who Could See Demons

Bestselling author Carolyn Jess-Cooke has written a brilliant novel of suspense that delves into the recesses of the human mind and soul—perfect for fans of Gillian Flynn and Lisa Unger. The Boy Who Could See Demons follows a child psychologist who comes up against a career-defining case—one that threatens to unravel her own painful past and jeopardizes the life of a boy who can see the impossible.

Dr. Anya Molokova, a child psychiatrist, is called in to work at MacNeice House, an adolescent mental health treatment center. There she is told to observe and assess Alex Connolly, a keenly intelligent, sensitive ten-year-old coping with his mother’s latest suicide attempt. Alex is in need of serious counseling: He has been harming himself and others, often during blackouts. At the root of his destructive behavior, Alex claims, is his imaginary “friend” Ruen, a cunning demon who urges Alex to bend to his often violent will.

But Anya has seen this kind of behavior before—with her own daughter, Poppy, who suffered from early-onset schizophrenia. Determined to help Alex out of his darkness, Anya begins to treat the child. But soon strange and alarming coincidences compel Anya to wonder: Is Alex’s condition a cruel trick of the mind? Or is Ruen not so make-believe after all? The reality, it turns out, is more terrifying than anything she has ever encountered.

A rich and deeply moving page-turner, The Boy Who Could See Demons sets out to challenge the imagination and capture the way life takes unexpected turns. In the best storytelling tradition, it leaves the reader changed.

A fascinating read! I was totally engaged in this story, a story that charts a passage through an alien landscape (Ireland, “The Troubles” and mental illness), territories that are painted in the grim shades of reality yet this is a picture that offers an optimism that speaks of healing and better times ahead.

The characters depicted in this book are both realistic and empathetic. Alex’s mother is depressed, self destructive and cries out for help and yet amongst this gloom her light shines on the son she is proud of, she passionately believes in his ability to rise above the bleakness of his surroundings; a rundown council flat, a life where money is scarce and happiness is even rarer, where onions on toast are gourmet delight. Alex is “different”; there are hints he may be autistic, he may have post traumatic shock, he may be schizophrenic. What Alex is, is talented, innocent, brilliant, comedic and knowing beyond his years.  And he can see demons! Dr Anya Molokova is a hero, has risen from her beginnings in poverty, is a talented academic and is the mother of child who had early onset schizophrenia, a child who had taken her own life. How could we not be warmed by her character and her determination to help others? And the minor characters are just as interesting and empathetic.

Jess-Cooke offers the reader a compulsive read; a real page turner. I was convinced by the quiet voice of this sensitive 10 year old, Alex, that demons were real and that he could see and talk to them! I was prepared to believe that Alex had a unique ability such is the convincing writing of Carolyn Jess-Cooke. I was not prepared for the final chapters! What a magnificent twist. I certainly did not see this coming; I could not have predicted this ending. Bravo!!!