A bizarre abduction. A body of damning evidence. A world of betrayal.

Eighteen-year-old Ellie Canning is found shivering and barely conscious on a country road, clad only in ill-fitting pyjamas. Her story of kidnap and escape quickly enthrals the nation: a middle-aged woman with a crazy old mother has held Ellie in a basement, chained her to a bed and given her drinks from an old baby’s sippy cup. But who was this woman and what did she want with Ellie? And what other secrets might she hide?

When the accusation is levelled at local teacher Suzannah Wells, no one seems more bewildered than Suzannah herself … to start with. The preposterous charge becomes manifestly more real as she loses her job and her friends. And the evidence is strong: a dementia-affected mother, a house with a basement, a sippy cup that belonged to her long-dead daughter. And Ellie Canning’s DNA everywhere. As stories about Susannah’s past emerge, even those closest to her begin to doubt she’s innocent.

And Ellie? The media can’t get enough of her. She’s a girl-power icon, a social-media star. But is she telling the truth?

A powerful exploration of the fragility of trust, and the power of suggestion, from the author of The Golden Child and The Mistake.

Praise for the Golden Child:

‘The novel is cleverly constructed, the characters are extremely well-drawn, the use of social media as a plot device is very sophisticated, and the resolution is a genuine surprise’ Judges’ report, Ned Kelly Crime Awards, 2017.

What a fantastic read!!!

I do love an unreliable narrator.  A fast paced read with some surprising reveals, I predict an award or two for this novel. 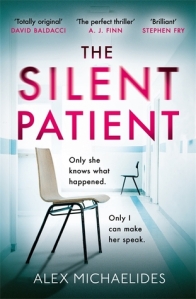 Alicia Berenson’s life is seemingly perfect. A famous painter married to an in-demand fashion photographer, she lives in a grand house with big windows overlooking a park in one of London’s most desirable areas. One evening her husband Gabriel returns home late from a fashion shoot, and Alicia shoots him five times in the face, and then never speaks another word.

Alicia’s refusal to talk, or give any kind of explanation, turns a domestic tragedy into something far grander, a mystery that captures the public imagination and casts Alicia into notoriety. The price of her art skyrockets, and she, the silent patient, is hidden away from the tabloids and spotlight at the Grove, a secure forensic unit in North London.

Theo Faber is a criminal psychotherapist who has waited a long time for the opportunity to work with Alicia. His determination to get her to talk and unravel the mystery of why she shot her husband takes him down a twisting path into his own motivations—a search for the truth that threatens to consume him….

“Unexpressed emotions will never die. They are buried alive, and will come forth later, in uglier ways. Sigmund Freud”

This is an exceptional debut.

Alex Michaelides “ studied English literature at Cambridge University and got his  MA in screenwriting at the American Film Institute in Los Angeles. He wrote the film The Devil You Know (2013) starring Rosamund Pike and co-wrote The Con is On (2018), starring Uma Thurman, Tim Roth, Parker Posey and Sofia Vergara. THE SILENT PATIENT is his first novel.” https://www.goodreads.com/author/show/17621440.Alex_Michaelides

Alex Michaelides writes a terrific psychological thriller that plays like a film in your head; visual, compelling, surprising. A narrative told in two voices – that of Alicia – whose thoughts and actions are explored via her diary (and art), before and after committing the crime that has her incarcerated in a secure unit, and the voice of her therapist.

I love the trope of the unreliable narrator – and in this book we are privileged to experience two such narrators! What a powerful tool this is in the hands of such a skilled story teller. And there is a magnificent twist that I didn’t see coming. 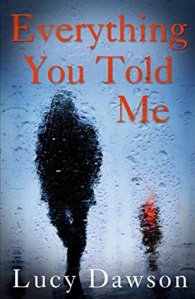 Everything You Told Me

Sally wakes up in the middle of nowhere, with a suicide note in her pocket and no memory of the previous twenty four hours. When she discovers what happened to her, she is shocked to the core…

Saturday morning, dawn. Mother of two Sally finds herself on a cliff top, miles away from home. The place is familiar but the journey is a blank. She’s lost the last ten hours of her life.

To all appearances, Sally was there to jump. She had nothing on her apart from a suicide note when the local police took her in. But Sally knows she would never leave her children behind…

Which leaves the question: who has done this to her? And who would believe Sally if she told?

A great read which has all the elements I like in a good  psychological thriller; an great opening hook – in this instance the protagonist wakes up alone and disoriented on a cliff top – not knowing how she got there and with what appears to be a suicide note in her pocket.

Then we have my favourite device – the unreliable narrator…Sally’s recollections, thoughts, are a little confused, she is sleep deprived, anxious… so much guilt, perhaps suffering post-natal depression?  What do we believe is happening here? Who is right?

Then there are the twists – so many – so good but just one little point that is essential to the outcome, the big piece of evidence that changes the whole direction of your thoughts… just seemed a little too convenient, just niggled at me – after I finished reading. At the time I was engrossed in this reveal, it changed everything. And I went with it, I followed this new clue, and was lead on another twisty path and the ending…would never ever have seen that coming. So all in all a really good read but just after I finished reading there was just that hint of bad taste in my mouth , the feeling that something was not quite right, a detail that was just a little too convenient and all too easily wrapped everything up (no spoilers here). Will it bother you? Who knows…you will have to read it to find out.

Things don’t go wrong in an instant. There isn’t one single moment when the world suddenly splits in two. Rather, it begins with a minute crack, and then another and another, until they join together, getting bigger and wider and all the time you keep fooling yourself that this can still be fixed. That you can fill them in and everything will return to normal.” p.130

Description:
You don’t have to believe in ghosts for the dead to haunt you.

You don’t have to be a murderer to be guilty.

Within six months of Pen Sheppard starting university, three of her new friends are dead. Only Pen knows the reason why.

College life had seemed like a wonderland of sex, drugs and maybe even love. The perfect place to run away from your past and reinvent yourself. But Pen never can run far enough and when friendships are betrayed, her secrets are revealed. The consequences are deadly.

‘This is about three deaths. Actually more, if you go back far enough. I say deaths, but perhaps all of them were murders. It’s a grey area. Murder, like beauty, is in the eye of the beholder. So let’s just call them deaths and say I was involved. This story could be told a hundred different ways.’

‘This is a novel of disquieting intimacy and controlled suspense, Aoife Clifford deftly tightening the screws until we share the narrator’s sense of emotional and physical confinement and the unremitting grip of the past.’ – Garry Disher, author of Bitter Wash Road.

My View:
Things don’t go wrong in an instant. There isn’t one single moment when the world suddenly splits in two. Rather, it begins with a minute crack, and then another and another, until they join together, getting bigger and wider and all the time you keep fooling yourself that this can still be fixed. That you can fill them in and everything will return to normal.” p.130

These statements sum up this book perfectly; as tiny cracks make themselves known flaws appear in personalities, in personal histories, in retelling of events. I really like the device of the diary to tell parts of the dual timeline stories. The trouble is Pen Sheppard is such an unreliable narrator that we never quite know if we are being shown the truth or a version of the truth, Aoife Clifford has baited her hook well, as a reader we just want to know what the mystery is in Pen’s home town, we are hooked.

The narrative rolls on, more dead bodies are found, the plot twists and turns and we understand a little more about why Pen acts the way she does, how trust is an issue, why she thinks her truth is dangerous. And dangerous it is! There were a few surprises that I didn’t see coming.

However I felt the ending let me and Aoife Clifford down. I won’t share any spoilers but will say that the ending left so much unsaid, so many loose ends, and so much history that needed righting (and writing). Maybe it is a sign of my investment in the book but I wanted more from this ending – justice was not served, so many details needed revealing to the police, so much information the reader had needed to be shared. I don’t like being left hanging. Maybe a novella is in the pipeline that will tidy the ending up?

Regardless of my dissatisfaction with the ending of this book it is a good debut, Aoife Clifford is an author to look out for.

On the night of 22 December 1980, a plane crashes on the Franco-Swiss border and is engulfed in flames. 168 out of 169 passengers are killed instantly. The miraculous sole survivor is a three-month-old baby girl. Two families, one rich, the other poor, step forward to claim her, sparking an investigation that will last for almost two decades. Is she Lyse-Rose or Emilie?

Eighteen years later, having failed to discover the truth, private detective Credule Grand-Duc plans to take his own life, but not before placing an account of his investigation in the girl’s hands. But, as he sits at his desk about to pull the trigger, he uncovers a secret that changes everything – then is killed before he can breathe a word of it to anyone…

This was a very very slow burn for me, a lot of time is taken to set the scene, provide some history and introduce the characters, however if you can force yourself to continue reading you are in for a treat!

A large part of the narrative is designated to trying to establish who the child is, and the methods used to determine the identity. Mystery and red herrings abound. The pace increases and before you realise it you are thoroughly engaged with this narrative.

This is in multiple view point narrative partly revealed by the sharing of diary entries gifted to one of the main characters who in turn shares the diary with another character. The diary is written by the investigator who plans to commit suicide when he finally concedes he cannot solve the puzzle of the crash survivor’s identity. Other characters also have an opportunity to share their views on the identity and the action taking place. One voice is particularly creepy.

The unreliable narrator has a wonderful time in this narrative playing with our perceptions, twisting the truth, conspiracy theories abound; the plot twists and turns and there are so many surprises and a dash of lunacy, murder, missing persons and ugly characters with ugly intentions that will keep you reading.

The translation is flawless thanks to the brilliant work of Sam Taylor.