By the bestselling author of Dark Matter and Thin Air, an outstanding new piece of story-telling, a tale of mystery and imagination laced with terror. It is a masterwork in the modern gothic tradition that ranges from Mary Shelley and Bram Stoker to Neil Gaiman and Sarah Perry.

“Something has been let loose…”

In Edwardian Suffolk, a manor house stands alone in a lost corner of the Fens: a glinting wilderness of water whose whispering reeds guard ancient secrets. Maud is a lonely child growing up without a mother, ruled by her repressive father.

When he finds a painted medieval devil in a graveyard, unhallowed forces are awakened.

Maud’s battle has begun. She must survive a world haunted by witchcraft, the age-old legends of her beloved fen – and the even more nightmarish demons of her father’s past.

Spanning five centuries, Wakenhyrst is a darkly gothic thriller about murderous obsession and one girl’s longing to fly free.

Wakenhyrst is a gothic feminist tale (is that such a genre or just the mantle I read this book with?) that oozes a chilling miasma of menace and madness. Superstition, religion and misogyny rule and life for a sensitive and intelligent female child is harsh, restrictive and lonely.

This character driven narrative offers an antagonist you easily abhor (the father Edmund Stearne) and Maud (the daughter) is the protagonist that you admire, empathise with and cheer on… Megalomania is Edmund Stearne – he is a tyrant, superstitious, self-obsessed, a sex manic, controlling and vile and ugly  – his beliefs, though extreme ( I hope) mirrored those of a society that held women in contempt and treated as (not very valuable) possessions. This was a very interesting study of attitudes and superstitions of the time.

The fens provide an eerie backdrop to the repressive madness that ruled Wake’s End. However I was expecting more, I felt the horror element lacked vitality. Creepy, eerie, repressive and yet fascinating sums up my emotional response to this narrative.

I was very fortunate to win a gorgeous, limited edition, advanced readers copy of a book I have already heard so many good things about.

I love the cover art, the copper foil ( copper is my new favourite pigment to use in my art) is stunning.

Opening the cover – I am the proud owner of book 34of 150 signed by the author Stacey Halls.

I look forward to reading this provocative narrative set in the times of the Pendle Hill Witch Trials which explores women’s friendships, women’s rights and explores the question “was witch hunting really women hunting?” 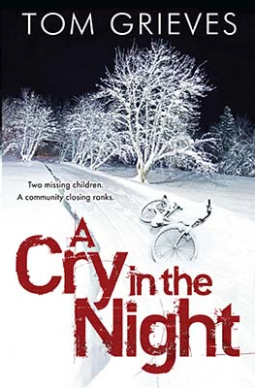 A Cry in the Night

The Lake District: a wild landscape, rife with stories. Detectives Zoe Barnes and Sam Taylor are called to investigate the disappearance of two children.

But they quickly realise they have been drawn into a complex and unnerving case that hides a much darker intent: as they dig deeper, whispers grow of a community hiding a deadly secret – and talk of witches, the like of which hasn’t been heard since the seventeenth century, is spreading.

Zoe and Sam will have to work fast to save lives; but in this atmosphere of fear and mistrust, can they even rely on each other?

This well written narrative explores the sinister side-effects that occur in a family and a community when a couple of young children go missing. Paranoia, irrational ideas and mob violence ripple across what on the surface appears as a peaceful and quiet village. The tension is palpable; old hurts, prejudices, grief, blame, deceit and exclusive behaviours combine to create a gripping cloak of fear and distrust amongst all involved in this mystery.  The web of distrust spreads trapping those who are commissioned to solve this case.

The characters are well developed, flawed and believable. This is such a complex story, missing children tug at the hearts of all and there is a suspicion that there is a link to previous incidents involving the death of other children; suddenly a conspiracy blossoms and smothers rationality. Hurt is everywhere. Blame rises to the surface. Many emotions are put under the spotlight; grief can be blinding, dis-empowering, small incidents become mountains that cannot be crossed.  This is a rich and powerful narrative about the fragility of being human.

This is also an interesting study in systemic/institutionalised sexism and bullying – in this instance in the police force; this layer of the narrative was particularly interesting yet at the same time unpalatable.  It had a realness that saddened me; I was not surprised by the attitudes, just saddened.

Yet above all this is a fantastic mystery and psychological thriller. You will be enthralled with the developing story, the mystery, and the suspicions, the veil of fear and the links to a sinister  past. You will not want to put this book down till you have turned the last page. This is a powerful read on so many levels; take from it what you want to find.