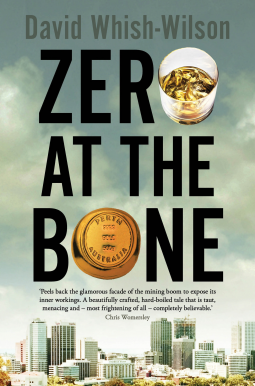 Zero at the Bone

Ex-detective Frank Swann is now on the outside of the police force – the only way to get justice done in Perth. In 1979 the city is a place of celebration and corruption. There are street parties, official glad-handing – even a royal visit – to commemorate a century and a half since colonisation. But behind the festivities a new kind of land grab is going on, this time for mining leases. The price of gold is up and very few, it seems, are incorruptible before its lure.

When Swann is hired to probe the suicide of a respected geologist, he’s drawn into a mire of vice and fraud, at the centre of which sit the directors of a gold-lease consortium. They’re an unlikely collection of the seemingly respectable and the clearly not, with one thing in common: a lust for wealth that verges on a disease.

For an old-school tough guy like Swann, that’s a gauntlet he just has to pick up . . .

I started reading this book because of its associations with Perth WA in the 1970’s.  I have lived most of my life in Perth and as a reader was interested to see this town through someone else’s eyes. What a surprise I got!  In the late 70’s I was a teenager just finishing high school and entering the work force. I was innocent to the ways of the bigger world, to the greed and corruption that was insinuating itself in the town I grew up in…I still believed that the police were there to serve the public and that bad things did not happen to good people….I believed in goodness. How naive I was…for a while.

To read David Whish- Wilson’s Perth was initially like reading of an account of a war zone in another country, a country with similar landmarks to my own but so vastly different in habits and culture that it felt alien, though the longer I read this book the more comfortable I became with this landscape. It is this very credible and visual account which pricked in my mind vague memories of newspaper and TV news headlines that as a teenager/young adult I had paid little account to, events this books alludes to – the rising tide of illicit drug use, corruption in government and public offices and greed and the opportunity for some, for instant immense wealth facilitated by the mining boom, the illicit drug trade and other illegal activities; a time of excesses.

Whish-Wilson does an excellent job of setting time and place; from fashions, haircuts, popular culture references, local landmarks, politics, characters, cars and celebrations relevant to that period, the author has researched his narrative to such a degree this almost reads like his own memory of that time.  What a superb effort, what painstaking details he has collated and incorporated into this story of crime.

Though violence is the trade mark of the clandestine world we are observing, the violence is not gratuitous; the narrative is considered, intelligent and engaging. The characters are well developed – and in particular that of ex Detective Frank Swann is well drawn, empathetic, and heroic. He loves his family, his love glows on the page. He is a loyal friend, a mate; he has ethics, which at times are compromised by the situations that leave him no choice in his actions or reactions…he is human and his frailties attest to this.

My final words; the plot is fantastic! The twists and turns, the corruption, the strategies being played out and the final sting in this tale were totally unforseen and unexpected. A triumph!