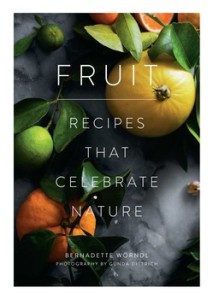 “My favourite breakfast. It easily lends itself to seasonal combinations using different grains, seeds and nuts or fruits. A grated apple always makes an appearance, though.” p. 17 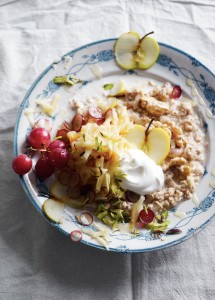 Coarsely grate one of the apples and roughly chop the walnuts. Place in a bowl and add the oats, linseeds, wheat bran, pepitas, milk, 200 g (7 oz) of the yoghurt and the salt. Stir well to combine, then cover and refrigerate overnight to soak.

The next day, roughly chop the pistachios and coarsely grate the second apple. Finely slice two grapes. Serve the muesli in shallow bowls and top with the apple, remaining yoghurt, grapes, pistachios and a drizzle of honey. 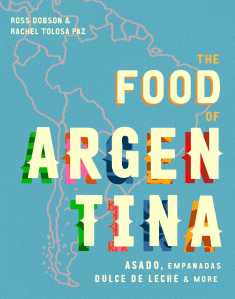 Barbecued capsicum with egg and pecorino

Cut each capsicum in half lengthways, remove the stalks, seeds and white membrane and discard.

Preheat a barbecue hotplate or grill plate to high.

Place the capsicum on the barbecue and cook, turning frequently, for 10–15 minutes – you want the capsicum to be soft, but not too charred.

Turn the capsicum so they are cut side up, crack an egg into each half, then close the lid of the barbecue and cook for 8–10 minutes, until the eggs have set.

To serve, sprinkle over the cheese and parsley, and drizzle over the olive oil.

This is a novel and colourful way to cook eggs and capsicums (bell peppers). The capsicums should be soft and tender, so give them some time alone on the barbecue before cracking in the eggs.

For a slight variation on this recipe, lay a thin slice of provolone over each egg instead of using pecorino.

Bring a small saucepan of water to the boil, then add the rice and boil for 5 minutes. Drain and transfer to a heavy-based saucepan. Add the milk, cinnamon, lemon zest and vanilla and bring to the boil over
medium heat. Reduce the heat to low–medium and simmer, stirring frequently, for 20 minutes or until the milk is absorbed, the rice is cooked and the mixture is thick.

Stir in the maple syrup.

Divide the rice pudding among 4 bowls, sprinkle with ground cinnamon to taste, then top evenly with the passionfruit, strawberries and almonds and serve warm with yoghurt.

This can be made the day before and chilled in the refrigerator overnight, if desired. The pudding will thicken on chilling, so loosen with a little extra skim milk, if you like.

GF R VG (if honey and bee pollen not used)

“This recipe will give you a beautiful probiotic parfait jar. We serve it at the restaurant and people always say how lovely this jar looks. Probiotic yogurt is full of good bacteria, which stabilize the gut, and the addition of spirulina makes it rich in minerals and protein. Chia is great for speeding up digestion, as well as being high in omega-3s. Enjoy taking care of your gut health with this beautiful jar of goodness.” p.89

For the chia pudding

1 tbsp honey or other sweetener (optional)

For the probiotic spirulina yogurt

To make the chia pudding, blend the nut or seed milk with the honey (if using) and vanilla extract in a mixing bowl. Stirin the chia seeds until well combined. Soak until the seeds have absorbed all the liquid and become gelatinous. This mixturewill keep for 3 days in a sealed container in the refrigerator.

To make the yogurt blend all the ingredients together in a highspeed blender until well combined.

To assemble, put a layer of strawberry slices around the edge of the base of the jars and add some yogurt. Spoon a layer of chia pudding on top of this. Finish with more strawberry slices, the bee pollen (if using), coconut chips and flaked almonds.

“These indulgent wholemeal pancakes have extra substance and flavour thanks to the oats and pecans. Delicious eaten straight from the pan or once cooled, popped in the toaster.” p. 207

270ml almond milk (or any milk of your choice)

“The ladies in my life love a bowl of berries like this in the morning. I think it’s because it tastes a lot like ice cream! Acai berries are one of the latest superfoods to reach our shores from South America and, among the many wondrous claims made of them, they are said to boost energy levels. So, no more excuses for staying in bed . . .” p. 196

TO MAKE IT LEAN

Leave out the acai juice or powder and replace it with an extra 100g of frozen berries if you’re watching your weight. 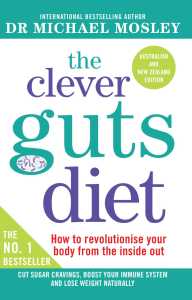 “The ground almonds, flaxseed and eggs make this a high-protein, low-grain breakfast or snack. This bread is best served warm or toasted. Try it spread with a little nut butter.” p.211

Line a loaf tin with parchment or grease it with coconut oil. Put the ground almonds, coconut flour, ground flaxseed, salt and baking powder in a food processor and pulse until everything is combined.

Then add the rest of the ingredients and pulse again to form a smooth dough.

Bake it for about 40 minutes or until it’s golden and cooked through (if you pierce it with a skewer it should come out clean). Leave it to cool, then turn it out. Store it in a zip-lock bag in the fridge or in the freezer, sliced.