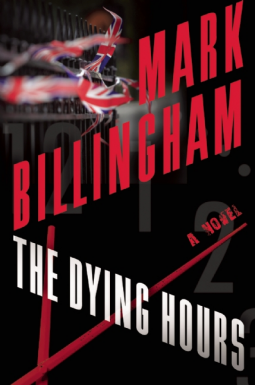 It’s been twenty-five years since Tom Thorne last went to work wearing the “Queen’s cloth” but now, having stepped out of line once too often, he’s back in uniform. He’s no longer a detective, and he hates it.

Still struggling to adjust, Thorne becomes convinced that a spate of suicides among the elderly in London are something more sinister. His concerns are dismissed by the Murder Squad he was once part of and he is forced to investigate alone.

Now, unable to trust anybody, Thorne risks losing those closest to him as well as endangering those being targeted by a killer unlike any he has hunted before. A man with nothing to lose and a growing list of victims. A man who appears to have the power to make people take their own lives.

I have read a few of the earlier  books in the Tom Thorne series and I must comment that whilst I enjoyed the mystery being resolved I did find the focus a little to gory in most incidents, whilst this episode is more  a psychological crime thriller, yes there is violence but there is much much more. The opening pages had me hooked – very clever and the twist took me by surprise, a great way to start a novel and it is a novel that can be read as a standalone or read in chronological order of the series.

A mostly bleak look at ageing, death, relationships, regrets, revenge and suicide, this book is written in shades of grey – there is no joy, there is no light.  I did not find the relationship of Tom and Helen to be at all convincing, just another drab, grey, unexciting chapter of Tom’s life and maybe that is what Billingham wanted to convey – that Tom’s life was as lifeless as cardboard cut out, and if so he succeeded.  However once you get over the greyness of the relationships in this book the psychological drama unfolds and captivates.  Revenge is a powerful motivator, the executing of the deeds was cold blooded and without emotion; what a sad reflection on life and I am glad this story is not based on actual events.

Billingham successfully creates a police procedural that is believable, detailed and prosaic. The economics of Modern Policing are a sad indication of how work in general has been reduced to tick boxes and outcomes of key performance indicators … echoing Tom’s life; grind and more grind. I felt as worn down as Tom was after reading this story.