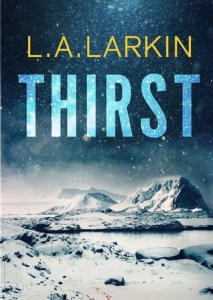 Antarctica is the coldest, most isolated place on earth. Luke Searle, maverick glaciologist, has made it his home. But soon his survival skills will be tested to the limit by a ruthless mercenary who must win at any cost. The white continent is under attack. The Australian team is being hunted down. Can Luke stay alive long enough to raise the alarm? Can he avert a global catastrophe?

Mac and Dave were in the throes of packing up at the crevasse where they’d been working – they were looking forward to getting back to Hope Station, the Australian base. Winter was settling in and most of the engineers and scientists had left Antarctica for the season; there would only be eight of them left on base for the duration…

Luke Searle had lived on the base for around seven years, going home to Melbourne only occasionally. He loved the research; as a glaciologist he could appreciate the beauty of the ice and the colours of the glaciers. But he respected the countryside as well – fully aware of how dangerous it could be. Maddie was team leader and though she and Luke clashed at times – usually over his stubborn refusal to obey orders – he respected her ability to lead.

But the suddenness of the attack; the brutality of what happened had him filled with terror. What was happening? As the team tried desperately to escape the looming danger, Luke wondered if any of them would survive.

With full-on intense action from the very first page, Thirst by Aussie author L.A. Larkin is a thoroughly enjoyable thriller. Fast paced, riveting and filled with the evil of man, the setting of Antarctica was unique and interesting, while the two main characters, Luke and Maddie set the tone well. Highly recommended – 5 stars.